The Mutant Insurrectionist: Talking about zines

Okay, here's an awesome new thing I made for Gathox - it's a zine. I'm gonna post the link first, so you can go get a copy, and then I'm going to talk about this zine and other zines. 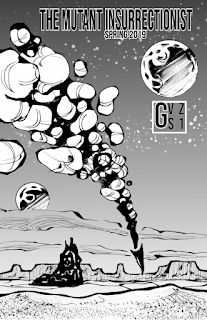 If the image link doesn't work for you, click here.

I haven't made a zine since the 90's, when I was going to all-ages shows in my old hometown and first figuring out how to use words and pictures. And honestly, I've enjoyed making this so much more than I expected and at least as much as I did when I was a kid.

First off, the zine has gameable bits from my home campaign. Almost everything has been used at my table by myself or by players, and I know that they work. The Mutant Insurrectionist contains adventure seeds presented in the form of newspaper classifieds. There's also unique items, a fresh spell, a new class, a new adventure location, some hirelings, the dungeon encounter table I included in a previous blog post, and more.

Second off, since this is a zine, I get to play with the content in ways I couldn't for other books. The jokes can be overt and very much on the nose: 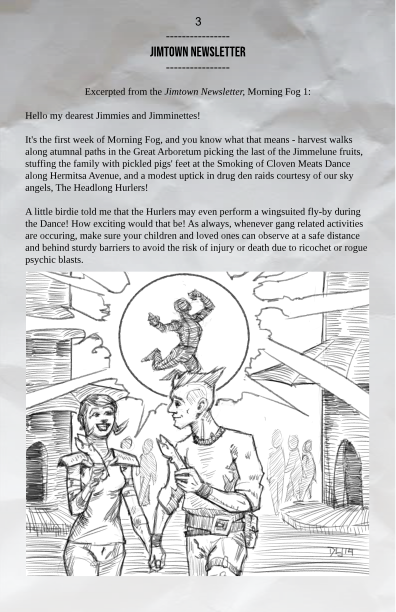 While I certainly included a generous portion of humor in both GVS1 and GVS2, there was no room in there for cheeky mock editorials featuring pickled pigs' feet and casual violence. Likewise, there was no room for diegetic hireling advertisements: 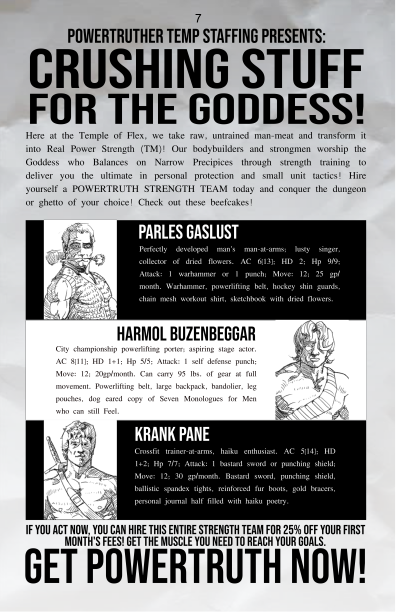 These brief, playable experiments get me stoked on the freedom of making things for their own sake, and I think that excitement shows through in the results. One of the key choices I made early on was to treat the authorial voice as if the zine existed in Gathox - it's a publication put together by the pompous and exploitative Turtle Tattlers Union Local 386, who has essentially cobbled together news bits and advertisements from around the city and repackaged them for their own profit. Sure, they've added some of their own content (mostly marks they've unsuccessfully attempted to hit), but by and large they're engaging in that laissez-faire casual theft which defines the attitudes of so many gangs in Gathox.

Another facet of The Mutant Insurrectionist being a zine is that the pressure is gone of having to make 'the perfect thing.' Not that I've ever made a perfect thing, but the point of the zine is to experiment with the presentation of things I've made for Gathox and share those results with other folks. It's not meant to win any awards, it's meant to entertain readers and give me a chance to test new ideas. I love it, and I intend to make more of them.

Why a zine? Why not just put more content together in a bigger book? Why not atomize what you've got into individual blog posts?

Sure, I could have spent a year or more making tons of this content in the quiet recesses of my spare time, eventually toiling over a big tome of miscellanea. Honestly, that sounds daunting and I'd likely bog down on it. At the other end, I could have turned it into 20 blog posts, but I truly doubt I would have tied those ideas together in a cohesive manner.

I want to make the thing.
Posted by David Lewis Johnson at 7:27 AM

Support me on Patreon!

Buy me a beer!